Building on the success of DN100, the DN200 off ers the same high headroom, dynamic response and sonic clarity, with the added convenience of two stereo channels in the same sized enclosure. DN200 is ideal for interfacing computers, keyboards, samplers and other electronic musical instruments to mixing consoles, and faithfully reproduces the character of electric and acoustic instruments, allowing far more of the detail of musical performances to be captured. DN200 is intended for professional applications where +48 V phantom power is a standard feature on all mixing consoles, and its innovative design results in a signifi cantly higher clipping point than many other active DI Boxes, providing +10 dBu output into a 2 kΩ load. This increased headroom means that much higher level input signals can be accommodated without the need for an attenuating pad. Combined with a very low noise input circuit topology, DN200 off ers a very wide dynamic range and only requires a single -20 dB pad, which is optimised for use with electronic musical instruments. 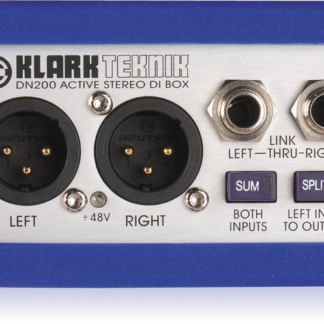 Covid-19/Brexit: some of our suppliers are experiencing delays of upto 2 months. If you have a requirement please let us know at the earliest opportunity, no matter how tentative. Dismiss